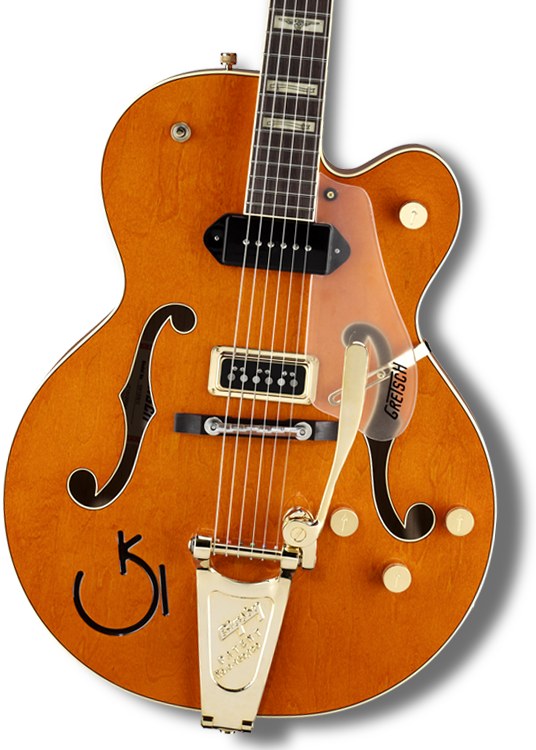 First single "Sittin' in the Balcony" peaks at #18.

Singin' to My Baby

Singin' to My Baby, the only album released during Cochran's lifetime, released.

Cochran records "Three Stars" in tribute to Buddy Holly, Ritchie Valens and J.P. "The Big Bopper" Richardson, who were killed in a plane crash while on tour earlier that month.

Cochran arrives in the U.K. to join a tour with Gene Vincent.

After a performance at the Hippodrome Theatre in Bristol, England, Cochran, Sharon Sheeley (his fiancée) and rocker Gene Vincent sustain severe injuries in a car accident on the way to Heathrow Airport.

Never to Be Forgotten

Never to Be Forgotten compilation released.

A '50s revival sends Cochran's reissued "Summertime Blues" to #34 in the U.K.

The Who include a famous cover of "Summertime Blues" on seminal live album Live at Leeds; the song was a Who concert staple from 1967 to 1976, with subsequent occasional performances until bassist John Entwistle's death in 2002.

Rock and Roll Hall of Fame.

Cochran is inducted into the Rock and Roll Hall of Fame.

One can only speculate on the musical heights Eddie Cochran might have reached had he lived beyond the age of 21. As it is, his all-too-brief career has left an indelible mark on rock music and rockabilly music, two forms for which he is equally revered as a talented pioneer. As a guitarist, Cochran played with strength, finesse, energy and authority, and the enduring image of him is of a handsome, nattily dressed young man with a charming smile, swaggering stance and an ever-present Gretsch® 6120 guitar. As a songwriter, he co-wrote more than 50 songs and recorded half a dozen enduring hits that perfectly—even poetically—encapsulated the experience of being a teenager. These include classics such as "C'mon Everybody," "Twenty Flight Rock," "Something Else," "Sittin' In the Balcony" and Cochran's biggest hit, the immortal "Summertime Blues."

Born Edward Ray Cochran on Oct. 2, 1938, in Albert Lea, Minn., he showed an aptitude for music while still a very young child. Older brother Bill Cochran left Minnesota in the early 1940s to serve in the U.S. Marine Corps, entrusting his Kay acoustic guitar to young Eddie, who promised to take good care of it. At Northside Elementary School, Eddie had his heart set on learning to play drums, but was discouraged on learning that piano lessons were a mandatory prerequisite for learning percussion instruments. He returned to his older brother's acoustic guitar and asked his uncle to teach him to play it.

The Cochrans moved in 1953 to Bell Gardens, Calif., where Eddie immersed himself in his increasingly adept guitar playing. He formed bands with junior high school friends, and by the time he entered Bell Gardens High School in 1954 he was playing western swing and country gigs in and around Los Angeles and earning a reputation as a serious guitarist. Also that year, Cochran teamed up with country guitarist/vocalist Hank Cochran (no relation); the two recorded and performed together as the Cochran Brothers.

In January 1955, at age 16, he dropped out of high school to become a professional musician. Also that year, Cochran acquired the guitar he was most closely associated with, a Gretsch 6120 Chet Atkins hollow-body. It was a brand-new instrument (serial number 16942) that he bought from the Bell Gardens Music Center with financial help from his parents. Cochran was very particular about his guitar sound, and he soon modified his 6120 by replacing the DeArmond DynaSonic™ neck pickup with a black Gibson® P-90, which had a warmer, jazzier sound that Cochran liked.

As Capehart shopped for a record deal for the young artist, Cochran's big break soon came in the unexpected form of Russian-born B-movie writer, director and producer Boris Petroff, who stopped by the studio one day and was immediately taken by Cochran's good looks. Petroff offered Cochran a bit part in a 20th Century Fox musical comedy called The Girl Can't Help It, which featured Jayne Mansfield, Little Richard, Gene Vincent, the Platters and Fats Domino.

Cochran's film debut was shot in August 1956; the song he performed was a number he'd just recorded at Goldstar in July, a rollicking rave up called "Twenty Flight Rock." The song was penned by a staff writer at American Music (Crest Records' parent label) named Nelda Bingo under the pseudonym Ned Fairchild, but Cochran received a co-writer credit—a standard arrangement at the time between publishers and performers who popularized songs by other writers (Nelda Bingo was the sole royalty recipient for "Twenty Flight Rock").

Released in December 1956, The Girl Can't Help It was Hollywood's first big-budget rock 'n' roll picture and a big hit, especially in Britain. It won a whole new and much bigger audience for Cochran, who by that time had signed with Liberty Records and had filmed a second movie appearance in Untamed Youth. His first single for the Liberty, "Sittin' in the Balcony," was recorded in January 1957 and hit Billboard's Top 100 chart on March 23, soon peaking at #18.

Cochran's debut album—the only one released during his lifetime—was Singin' For My Baby, released in November 1957. It was an uneven effort full of ballads foisted on him by Liberty, which was, as noted in 2003 biography Three Steps to Heaven, trying to position Cochran as "an inoffensive hybrid of Pat Boone and Elvis Presley." He spent the remainder of the year and early 1958 recording singles (Liberty issued "Twenty Flight Rock" on Dec. 2) and playing in package tours in the United States and abroad.

Nonetheless, Liberty was where Cochran perfected his sound, recorded his biggest hits and achieved stardom. A summer 1958 Cochran/Capehart original called "Summertime Blues" became his biggest hit and an enduring rock anthem of teenage frustration later covered by countless acts, most notably the Who and Blue Cheer. Originally a B-side, it peaked at #8 on the Billboard Top 100 chart on Sept. 29, 1958, and reached #18 in the U.K. In October, "C'mon Everybody" was recorded and released, reaching #35 in the United States and #6 in the U.K. after its January 1959 release there. "Nervous Breakdown" followed before the year was out, and "Teenage Heaven" was recorded in January 1959.

Devastated by the Feb. 3, 1959, deaths of friends Buddy Holly, Ritchie Valens and J.P. "The Big Bopper" in an Iowa plane crash, Cochran recorded "Three Stars," but the song wasn't released until 1966. Cochran made his final film performance in summer 1959's Go, Johnny Go! Another Cochran classic, "Somethin' Else," was recorded on June 23 that summer. More touring, sessions and television appearances ensued for the remainder of 1959.

Tragedy struck in spring 1960 during a U.K. tour when, after an April 16 performance at the Hippodrome Theatre in Bristol, England, Cochran, Gene Vincent, songwriter Sharon Sheeley (Cochran's fiancée) and tour manager Pat Thompkins got in a hired Ford Consul to be taken to Heathrow Airport in London for a return flight to the United States. At approximately 11:50 p.m., driver George Martin lost control of the vehicle when it blew a tire on a bend in Rowden Hill, Chippenham. The car struck a concrete lamppost, and Vincent, Sheeley and Cochran were thrown from the vehicle. Martin and Thompkins emerged relatively unscathed, but Vincent, Sheeley and Cochrane were severely injured. All three were rushed to St. Martin's Hospital in Bath, where Cochran, 21, died at 4:10 p.m. the next day—Easter Sunday. His last single release, recorded only three months earlier in January 1960, was "Three Steps to Heaven."

Posthumously, Cochran achieved enduring icon status, with subsequent generations of rock musicians heavily influenced by his work. It is perhaps testament to his uncanny knack for zeroing in on both the joy and the angst of being a teenager that he was covered by polar opposite acts such as Led Zeppelin and the Sex Pistols ("Somethin' Else"), and it's clear that greats such as Jeff Beck, Jimmy Page, Pete Townshend and many others emulated Cochran to great extent. Perhaps the best example of this came on June 6, 1957, at St. Peter's Church Hall in Liverpool, England, when 14-year-old Paul McCartney met and impressed 16-year-old John Lennon by playing and knowing all the lyrics to "Twenty Flight Rock," a feat that earned McCartney membership in Lennon's skiffle band, the Quarrymen, which later became the Beatles.